That's right. Just got a place in Old Town Pasadena 10 miles out of downtown LA and I'm starting to settle in. It's a great location only two blocks off of Colorado Blvd. (think Beach Boys hits) and only five min's to San Gabriel Mtn's!
I must admit that with moving in the day before Thanksgiving, (which happened to also be my birthday this year... yea!) I have had little time to get into design mode for the new digs. The current "move-in" furnishings are a vintage Ikea (seriously, this stuff is about 15yrs old) inflatable sofa and two chairs that I used in a Las Vegas showroom I designed for Blizzard Skis and a few very cool mid-century & 70's pieces that I thrift shopped around LA.
Soon, and very soon I will be sharing some videos of the apt. makeover or should I say "make" since it is cream walls w/ beige carpet. Yeah, its bad but just wait until I get to it! Should be a ton of fun. 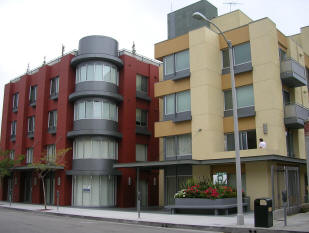 The Villa Gets a Makeover!

It was time. After many years of enjoying our house with it's groundbreaking "Birch Plywood Flooring" and multi-color wall palette, it was time, (or should I say Tyme) to re-imagine the residence. Soooo what better way to start than with a fresh new palette of grays & whites.
Just what a neo post modern villa needs!
The plywood came out and in went this beautifully sustainable strand woven bamboo hardwood.
To compliment the wood, I used a dark gray Italian porcelain tile in the kitchen and wrapping the bar area as well.
So many times the most inspiring pieces of the design process are little ones. Things that come to mind right in the midst of execution. These are what makes creating & designing so exciting!
For me it was the thin strip of aluminum that I used to separate, (or might that be join) the living room's wood floor from the kitchen porcelain. It's just the thing to make the floors pop.
And yes that is an Eames Sofa Compact. I found the sofa sitting in a friends old sawmill in rural Pennsylvania and realized it was a very early Eames piece with only two braces instead of the current three. WooHoo! 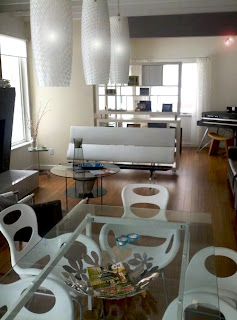 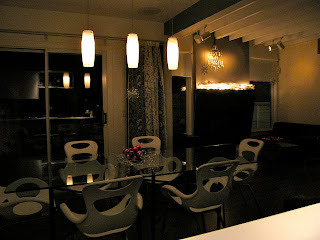 The new surroundings are energizing and I am completely enjoying them.
Hope you do too!
Posted by TYM at 10:57 AM 2 comments:

The Lure of the UK 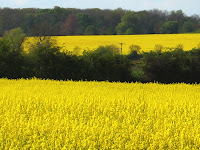 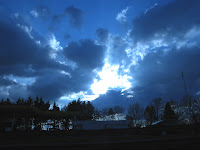 So here it is waaaaaay beyond my last entry and I've decided to summarize my UK trip and move on to blogging only about design and the creative.
My time in the UK was so pleasant and inspiring! I was there to allow my mother to travel to places she had enjoyed while living there in the 70's and visit a few friends who she'd not seen in years. It was by all accounts a success.
Friends were older and places had changed but the allure of our 70's temporary home was still there. We spent a couple days in Edinburgh, Scotland and a few days around Nottingham (where we used to live). We eventually made our way to Cambridge which for me offered a truly magical evening. I went out for a walk after my mother had turned in for the night, making my way downtown toward the colleges. Most stores were closed and a light sprinkling rain had ended. The balmy damp air felt so right... so England. I sat in front of a long row of the colleges, sipping on a cappuccino at about 9pm. The sky was clear and soft with the now set sun back lighting the outline of the buildings architecture. The color of the sky was the deepest indigo blue I've ever seen with a glowing outline of orange at the buildings edges. Below the intricate horizon were randomly lit windows emanating a soft creamy yellow light. I could not escape the thoughts of all the students, some incredibly famous but most not who had spent some of their most exciting years in those halls. Not for decades as would be the case in America, but for centuries. Hundreds of years of history, people, stories and events. Thank you Mom and thank you England!
Posted by TYM at 8:21 AM 77 comments: 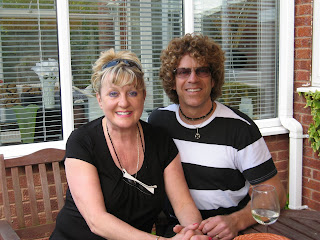 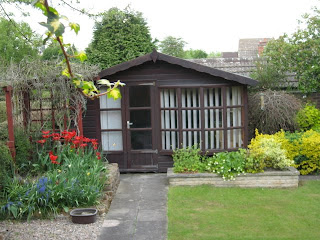 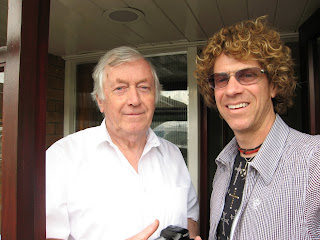 Arrived at London's Heathrow Airport and the critically acclaimed, "Terminal 5" so I was really not expecting to disembark the plane... straight onto the tarmack! Are you kidding?! C'mon queeny. At least finish the thing before you hype it all up and then stick us on a shuttle and let us wait for an hour to go through customs. What was done was really cool modern, techy design... I did like that.
Upon renting our Toyota Prius, (which by the by, allowed us to avoid the congestion charge in downtown London. Magic.) we planned to head through Stratford upon Avon and then on to Nottingham to our friends the Adcock's. Well, as it happened I noticed a sign for Warwick Castle and mentioned how cool it was, having been there with my family a couple years back. Me "Mum" said she'd like to see it and could we make the diversion so I literally hurled the car into the left lane and up the exit. Very last minute you see. That pic on the intro entry is of Warwick Castle soooo, check it out. Really beautiful place!
Next we cruised into Stratford and strolled around town and down by the river. It was an uncharacteristically sunny day and people were sunning themselves and just generally enjoying the day. I'm always taken by the thought of Shakespeare and the like strolling around on the same streets that me & mum are experiencing that very moment. Wow!
From there it was on to a friend whom I had not seen since she'd moved back to the Stratford area a couple years back. She had no idea I was in the country but with the help of her employer and a co-worker they got in touch with. When her boss, John handed me the phone she had no idea who it was. What a great surprise! Me mum and I stopped by for a visit with Sharon and her parents in their back garden and it was lovely. Really good to see her and meet her folks and get a sense of her world far away from Starbucks (Village at Coventry). Great to see you Sharon!
Finally, we got ourselves to Nottingham and to John & June Adcocks house. It had been a few years since they'd last seen each other and we all sat up late talking about everything from family to Obama to national health care. Great fun.
As I walked outside to take a short walk, I was stricken by just how different the UK is from America. So very different. Different words, different architecture, different lifestyle... different everything. Good different but different. I was really looking forward to my time in Nottingham. Back where I played as a boy. Fairham Comprehensive School for Boys on Clifton Estate and Saturdays in downtown Nottingham, running wild and shopping for a new table tennis bat. Playing in the woods at Wollaton Hall on the zip line and going through the Hall specifically to gawk at the stuffed gorilla and it's fully exposed private parts. That was one big gorilla... musta' been Italian.
Hope you're enjoying it... I sure did.
Posted by TYM at 1:18 PM No comments: 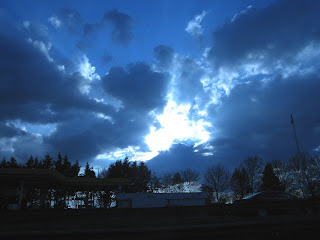 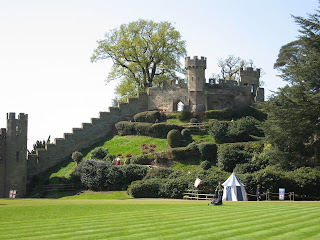 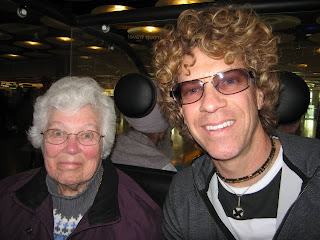 This is gonna be a short one but the first in a series of "The Travels of Tym". I recently had the privilege of accompanying my mother, Norma (Michener) De Santo, (cousin of author "James Michener") to the UK for 10 days to visit friends and places from her/our time we lived there. What a lovely country and a page right outta history, er, is that "Bedrock"...well I guess it is history since the pages came from it and not the other way around... 'ish?
Seriously, it was a very refreshing and reflective tyme for me with visits to a number of favorite haunts. From my 2nd form year, (8th grade) at Fairham Comprehensive School for Boys in Nottingham, England and Saturdays riding the bus into downtown Nottingham for the day with my friends, at 12 years old. Whoa, Mom & Dad, (posthumously & lovingly on the Dad side) what were you thinking! I would barely let my kids, (@ 12) ride their bikes to a friends house, ("oh, and be sure to call us when you arrive") much less let them go hang out with 3/4 of a million people I DON'T KNOW in a strange country... c'mon. Hey, I mean strange to us, not strange-wierd. Yeah, back to the point.
Well, this is the introduction for my 10 part travel blog to the UK. Be sure to check back often as the images will be brilliant!!! I was able to spend some time with my long-time friend and amazing internationally acclaimed photographer, Greg Allen. Greg was kind enough to come into London our last two days and shoot a few fantastic photos of "Me & me Mum".
Hope you like it! Cheers.
Posted by TYM at 12:13 PM No comments: 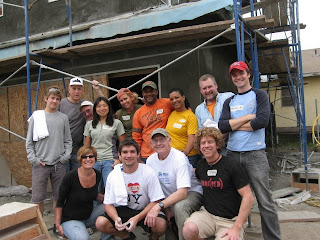 Another sunny day in California! Just back from a week in Santa Monica with my family where we had the privilege of working on a few families homes with Habitat for Humanity. Plenty to do and plenty of fun. Billy and Bethy were the consummate site supervisors always keeping things moving and we met some great people who had given their day to help out. I was pleased and impressed with two architects, Eric and Patrick who are pursuing new employment opportunities who decided to jump in and build with Habitat in the meantime... Go Guys! In fact everyone there deserves a big thanks for getting involved!
My son Rio and I spent most of our time laying sub-floor in the bathroom and my wife Dawn and Rio's friend Cole nearly caulked a whole house... sore joints and white latex fingers to prove it. A big thanks to Alison with Hollywood for Habitat who does such a great job working with the entertainment industries involvement with Habitat for Humanity!
From 70 and sunny in L.A. to 35 and light snow in Chicago we headed home to enjoy a bit of spring weather. Oh, it's coming... just takes a little while to get going.
I'll be speaking tomorrow about getting inspired and inspiring others to get involved in a great opportunity in Ft. Wayne, IN. With millions of dollars available in grant money to rehab foreclosed homes and breath new life into a number of Ft. Wayne neighborhoods, I am looking forward to an exciting time!
Through adversity come some of our greatest opportunities and for Ft. Wayne, it's one of those moments. To find out more about the NSP (Neighborhood Stabilization Program) go to: http://nspfortwayne.com.
Inspiring people in their everyday journey... that's what it's all about.
Posted by TYM at 5:49 AM No comments:

Labels: A ":Habitat" to Remember

Just back from LA and reflecting on my visit to the Eames House in Santa Monica... what a serene tyme! Caught me a little off guard imagining Charles and Ray living in such a responsibly designed and built structure in the midst of LA excess. They moved into the house in 1949 and lived there until their deaths in '78 & '88 respectively. The main house at 1500 sq ft and the studio at 1000 sq ft are all they required to live, love and inspire a generation of Americans!
I was re-inspired, (if not a bit teary-eyed) as I realized their contribution to my, (and my design co-hort Dougal's) sense of the creative. Thank you Charles and Ray Eames!
Please check out the link for a bit of perspective and when in LA, make an appointment and visit the house. The best $5- you'll ever spend!
Posted by TYM at 8:36 AM No comments: